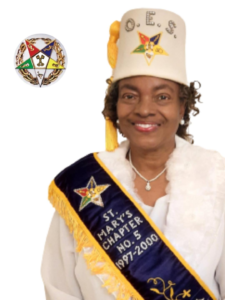 I am honored to be the Grand Treasurer for Excelsior Grand Chapter Order of the Eastern Star for the TN Jurisdiction.
• Formerly served Excelsior as Grand Historian
• Executive Board Middle TN Representative

• Former Deputy Imperial Directress of Actual Past Commandress Degree Team
• Former Deputy for the Desert of TN for the Imperial Court Daughters
• Founded several book grants programs, toy drives, spearheaded training and many charitable events throughout the TN Jurisdiction, two of which are named in my honor
• She holds an extensive background in Management, Accounting, Logistics, and Counseling which compliments my four college degrees
• Seven years of accounting experience managing over $3 million dollars monthly for the US government and 10 years’ experience as Bookkeeper for St. John Baptist Church.
• Certified EEO Counselor, Mediator, Facilitator, and Instructor along with being a charter member of various EEO programs for the US Government
• Serve in several capacities for my church and other civic organizations throughout Clarksville community assisting persons less fortunate, civil rights, and public speaking.
• I enjoy worshiping the Lord and meeting new people.

May God continue to bless our Grand Chapter, the State of Tennessee and Prince Hall Affiliates