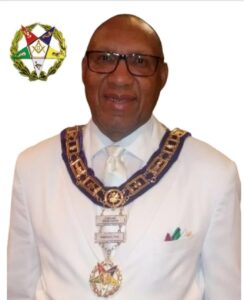 Greetings from the Grand Worthy Patron.

Willie L. Jackson Sr. 33º was born in Knoxville, TN. March 9, 1956. He was educated in Knoxville public schools. Attended Knoxville College.
Served in the United State Army for 9 years and was honorably discharged in January 1985.
Recently retired from United Postal Service after 40 plus years.

He is an Ordained Pastor and has been in the ministry for over 32 years. He served as Pastor for Williams Chapel Church in Riddleton, TN for over 6 years. He is currently serving as the Pastor of Operations at Southside Community Church in Nashville where Jerry L. Maynard II is the Senior Pastor.

He has been married for 34 years to Vivian Gail (League) Jackson. Together they have 5 children, 16 grandchildren and 6 great-grandchildren.