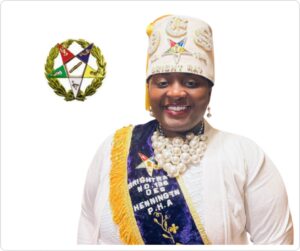 Thanks are given to God for each of you. You are uniquely and wonderfully made and it is a blessing to be in service with such a dynamic team of sisters and brothers.

Sister Pickett joined and became a life member of the Phyllis Chapter of the Phylaxis Society in 2014. There she has written several scholarly papers that have been published in the quarterly issue of the Phyllis magazine. She has also been chosen to present her research during annual sessions of the Phyllis Chapter. Furthermore, she was invited to present her research to the honorable brothers of the Phylaxis Society at their annual session in March of 2020. It was with great thanks that she received the “Cup of Knowledge” from the honorable brothers as a token of appreciation.

Sister Darneasha C. Pickett is a member of the Afro-American Historical and Genealogical Society (AAHGS), a member of the Association of Black Women Historians, a member of the Beck Cultural Exchange Center and she is a researcher for the West Tennessee Heritage Center in the city of Brownsville. She manages the IT Infrastructure for over 400 stores throughout the United States as she performs RAID (Redundant Array of Independent Disks) Configurations, Active Directory Management, Transaction Verification, and other actions as required.

In Closing, all thanks to God and the ancestors for their fortitude, passion, and persistence. It is by way of their labors over the years that have kept our Grand Chapter striving. As we go forth into this incoming year I will keep God first, the ancestors in mind, and do my best in serving Excelsior Grand Chapter as your Honored Grand Associate Conductress!

“Unity is Strength… When there is teamwork and collaboration, wonderful things can be achieved” Yours in Service, Sister Darneasha C. Pickett