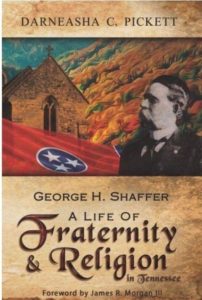 George H. Shaffer: A Life of Fraternity and Religion in Tennessee,is a highly anticipated story of Dr. George Henry Shaffer’s life, particularly his fraternal and religious involvements. The cover of the book includes a rare image of Dr.Shaffer. It was printed in the Indianapolis Recorder located in Indianapolis,Indiana, on March 24, 1906. Brother Shaffer was born October 19, 1843, placing him at sixty- three years old at the time the image was captured.

1 The church, represents Dr. Shaffer’s lifelong dedication as a minister of the African Methodist Episcopal Church.The grassy mountains portray the ups and downs Dr. Shaffer faced during his life.

Lastly, the Tennessee flag flies in brother Shaffer’s view as a symbol of remembrance of the difference he made while residing in the Volunteer state.

To receive publication and event updates

Visit George H. Shaffer: A Life of Fraternity and Religion in
Tennessee and “Like” the Official Facebook page

1) 1936, George H. Shaffer, Official Death Certificate The Foreword will be contributed by Brother James R. Morgan III. Brother Morgan is a graduate of the Howard University in Washington, D.C. where he obtained a Bachelor of Arts Degree in Communications and African American History in 2011.

He is a genealogist and member of the James Dent Walker chapter of the African American Historical and Genealogical Society (AAHGS) and a panelist on the Black ProGen Live YouTube show.

He is a founding member and Co- Panelist on the monthly YouTube based show entitled “The Prince Hall Think Tank” Brother
Morgan serves the Most Worshipful Prince Hall Grand Lodge of the District of Columbia as its Worshipful Grand Historian & Archivist.

Additionally,brother Morgan is an Honorary Fellow of the Phylaxis Research Society.

Brother Morgan is the author of the book
The Lost Empire: Black Freemasonry in the Old West
(1867-1906)

Darneasha C. Pickett was born January 31, 1994. She was
born to Charles and Demetra Pickett. She currently resides in
Henning Tennessee, where she serves as the Worthy Matron
for Bright Ray Chapter No. 136.

Darneasha currently serves
as the Chairman of Committee on Foreign Correspondence
(CCFC) and Advisory Board Member for Excelsior Grand
Chapter, Order of the Eastern Star, Tennessee Jurisdiction,
Prince Hall Affiliate. She is a life member of the Phyllis
research Chapter for the Order of the Eastern Star (PHA),
where she has contributed educational articles to their
magazine. Darneasha is also a subscribe and supporter of the
Phylaxis Research Society magazine.